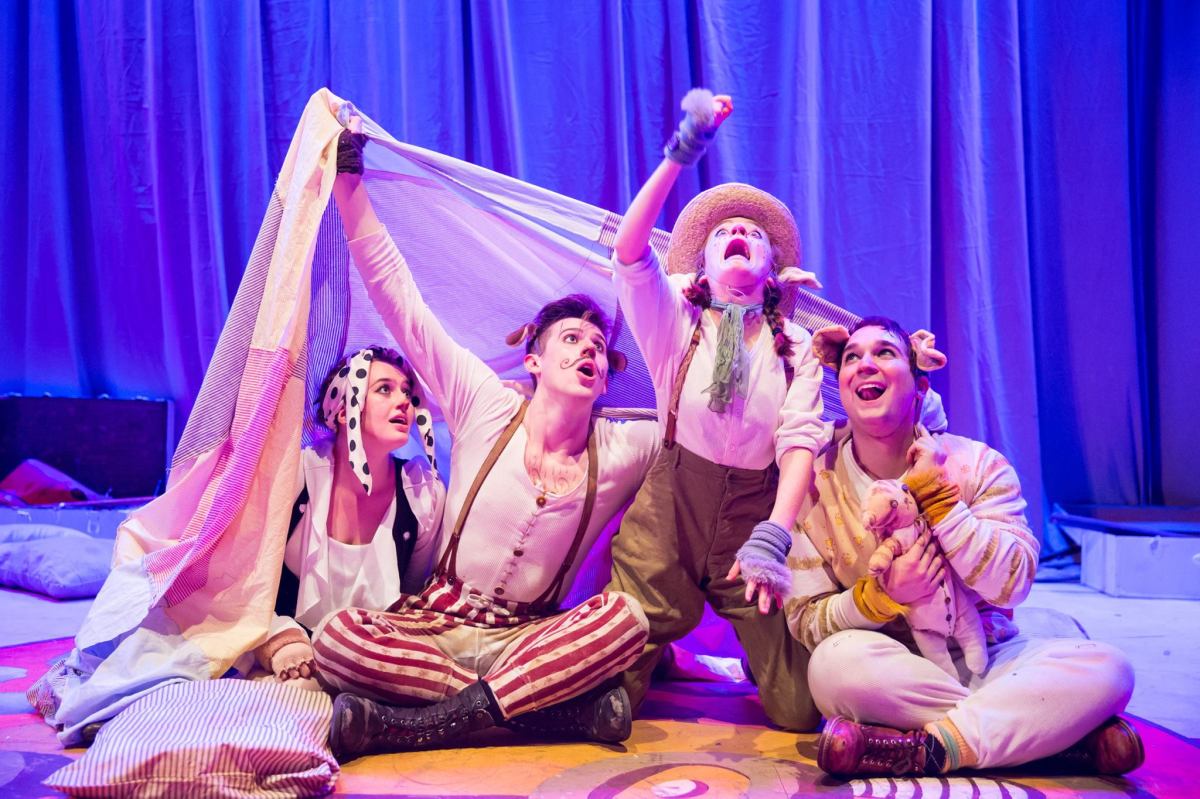 Meet the Hanslick Girls: Gwen, Eleanor and Dania. Created by writer Zach Barr, they are a trio of Northwestern students who always go to see plays together. They may not have the same opinions, but their conversations tend to make for an entertaining read. Recently, the Girls saw “Go Dog Go!,” Imagine U’s french mime piece directed by Gina Marie Hayes. Let’s hear what they had to say on their way back from the theater…

“You’re too big to play on the stage, Hazel. These are little, little children.”

Hazel grumbled and grabbed onto Gwen’s hand. As the girls attempted to make it through the traffic jam of young children and parents that clogged the pathways of the Mussetter-Struble Theatre, with Eleanor attempting to lead them through, Dania glanced over towards the stage. A parachute had been laid out, and children were running under it. She was much, much too big to be playing there – well, she was there in spirit, anyway.

Making it to the far right of the space, Eleanor began to leave, before hearing Gwen behind her.

Eleanor, turning, caught sight of Hazel running up to one of the performers, Daniella Martino. She had played a dog who wore many hats throughout the performance, always asking the approval of the play’s MC Dog (the amicable Sam Linda) – a scene Eleanor vaguely remembered from the P.D. Eastman book the play was based on. In fact, listening to the play, with its disconnected and non-sequitur dialogue, she had recalled more of in than she had expected. Dogs in trees, dogs in cars, dogs going in and out…

Gwen and Hazel rejoined Eleanor and Dania outside the theatre.

“She wanted to tell the ballet dog that she liked her hat,” Gwen explained.

“I did too,” Dania agreed. “You don’t need anyone’s approval to wear your hats, Hazel.”

They walked out the new entrance to the Wirtz Center, into the warm wind of late April.

“How is Hazel getting back home?” Dania asked.

Gwen checked her phone. “My mom is coming to pick her up, but the show was a little shorter than I thought. She’ll be here in about fifteen minutes or so.”

“So we just have to kill fifteen minutes?” Eleanor asked. “What do we want to do?”

As they spoke, Hazel had run up ahead, pulled by the grassy knoll just across the road from the Wirtz Center. She looked both ways and, seeing no cars, ran across the street.

“Hazel!” Gwen shouted out, and chased after her. Luckily there were no cars in sight, but Gwen ran as if Hazel had run out into a freeway. Eleanor and Dania followed behind.

“I wanna go to the grass!” Hazel said, pointing towards the valley.

“It’s fine,” Gwen said with a sigh. “You want to just play here for fifteen minutes?”

“Yeah!” Hazel said, running up to the trees in the quad.

“Okay, okay,” Gwen said. Turning back to her friends, she announced, “I guess we’re staying here for a little while.”

“Fine by me,” Dania said. “We might as well take advantage of it now that the grass isn’t under construction anymore.”

The three sat down on the grass and watched as Hazel ran up the incline of the lawn, positioned herself at the top, and then fell into a roll all the way down the hill. All the time calling for Gwen and her friends to watch her.

“We’re watching!” Gwen called out. In the distance, they could hear the excited voices of other children leaving the theatre just a few yards behind them.

“Hazel was probably a little too old for that show, considering,” Gwen began. “Lots of babies, like tiny babies there.”

“Well, aren’t we too old for it?” Eleanor asked.

“But for different reasons, I guess,” Eleanor said. “Besides, she seemed to enjoy it.” She called out to Hazel as she ran back up the hill. “You liked the show, Hazel?”

“Yep,” came the brief response, before she fell down the hill again.

“I thought it was cute!” Dania said. “The little doggos, all over the stage. Driving their cars and stuff.”

“It was cute,” Gwen agreed. “Not a lot of plot, just a few fun scenes. The Moon River section got me particularly.”

“That was such a sweet moment!” Dania exclaimed. “With the boat, and the party, and the moon, and the…”

“…river?” Eleanor added, after a pause.

“Yes, the river,” Dania chided. “But it was actually cool, like the scene where they’re swimming in the river and the sound goes all muted for a second. It was really cool.”

“The french horn from Blue Dog was a nice touch too,” Gwen said. “Gave it a little mournful sound. It’s a talented cast, and they really did use every part of their talents.”

“Yeah,” Eleanor said. “My favorite moment was the daddy doggo, in the nighttime scene –”

“The dad dog, fine,” Eleanor said. “When they were under the covers. And the kids started to catch on to the pattern, so even when he just came out before yelling at them…”

“The girl sitting behind me was so cute!” Dania said. “She was clapping along and everything, during the songs.”

“Always go to the 11am show of an Imagine U show,” Eleanor advised.

“And the opening bit with the skates, that killed me,” Dania said. “So funny, and then he learns to skate on them.”

“It’s just full of moments like that,” Eleanor said. “Little things that you remember later.”

“But there’s a unifying spirit to it,” Gwen added. “It’s not simply random, there’s a stylistic similarity to it all. The French mime style certainly helps.”

“Yeah, what is that exactly?” Eleanor said. “You mentioned it before, but I didn’t totally get it.”

“It’s the way that they’re performing, generally,” Gwen explained. “The exaggerated expressions, the silent comedy, the changes in how scenes are paced, moving from very fast to very slow…”

They watched Hazel, who had shifted from rolling down the hill to playing with sticks.

“Careful of your eyes, Hazel!” Gwen called out. She began to get up, but Hazel threw the sticks down and ran over to the statue nearby. “Anyway,” Gwen said, returning to her explanation, “I’m probably not doing the French mime trade justice with my description of it, but it’s a style. The show isn’t necessarily written that way.”

“What, with the little plastic P.E. wheely-boards they used for cars?” Eleanor said. “Or the chair-trees?”

“I literally loved those wheely-boards in primary school,” Dania agreed. “And loved seeing them come back here. Even if the granny dog was funny using them.”

“Okay, for real though,” Eleanor said, “the granny dog angered me.”

“How could you hate the granny dog?” Dania said, shocked.

“Because she was incredibly slow and was getting in everyone’s way!”

“She was only in the way of that jerk Brown Dog who wanted to be some kind of speed demon or something,” Dania defended.

“Yeah, and what does she do?” Eleanor said. “Basically steals his car and drives off!”

“How can you hate Andrea Canizares-Fernandez?” Gwen asked. “She’s adorable in this show.”

“No, she was great, nothing against the actress,” Eleanor said. “It’s just that one granny dog.”

“Actually, no,” Gwen said, “you want to talk about annoying dogs, the Yellow Dog, who just steals food from Green Dog –”

“I noticed that!” Dania agreed. “I totally noticed that! And he just gets away with stealing Green Dogs food!”

“And it’s worse,” Gwen continued, “Because then when Green Dog realizes that she – Green Dog was also Andrea, maybe I was just emotionally attached to her as Granny because of this – when she realizes that she has no sandwich, Yellow Dog gets all the credit for being the nice person who hands over half of his sandwich to help her –”

The girls trailed off as they laughed over their outrage at the Yellow Dog. Gwen fell back into the grass, laughing and thinking through the show’s many fun moments. The Dog Party with juggling and tap dancing, the little dog race track just barely large enough to be discernable, the sun (the yellow sun) shining over the busy construction site, all interrupted by –

“Bbbbbbbbbb…” heard Gwen. She looked up, to see Hazel, with her two fists out in front of her, clutching onto an invisible steering wheel, slowly walking up around her sister on the grass, turning around and driving between Gwen and Dania, then turning to circle around Eleanor and head back down between her sister’s friends. She squinted her eyes in the sun, imagining a windshield, and drove on through the tall grass.