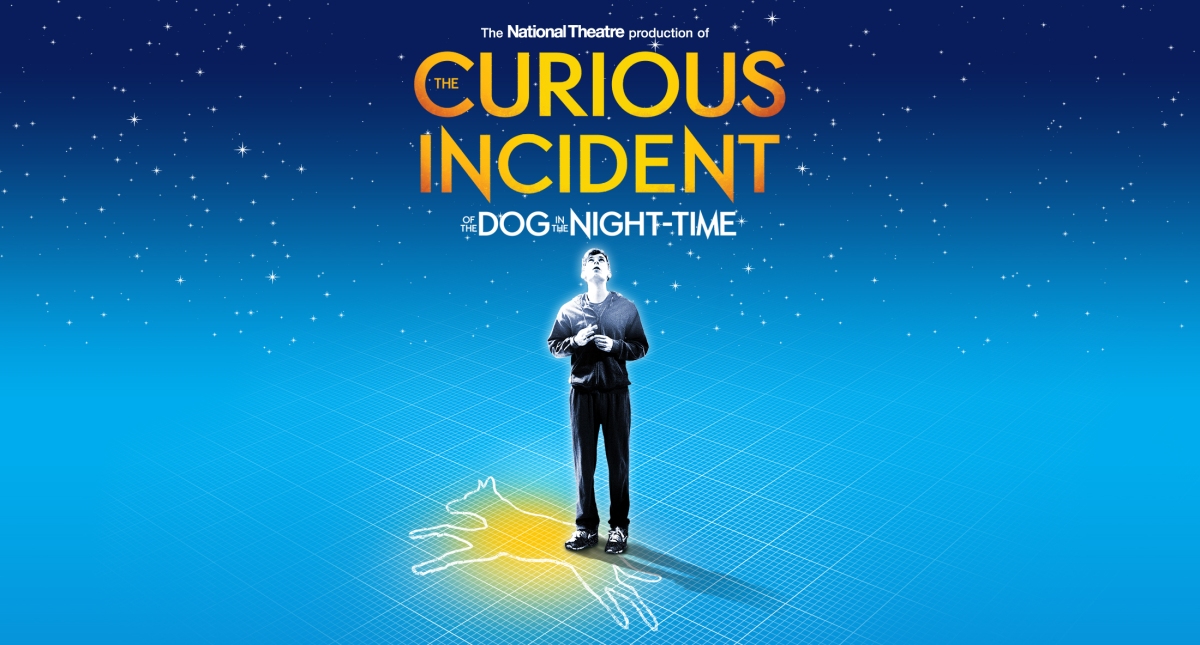 Meet the Hanslick Girls: Gwen, Eleanor and Dania. Created by writer Zach Barr, they are a trio of Northwestern students who always go to see plays together. They may not have the same opinions, but their conversations tend to make for an entertaining read. Recently, the Girls saw “The Curious Incident of the Dog in the Night-Time,” on Broadway. Let’s hear what they had to say on their way back from the theater…

Standing outside the Barrymore Theatre, Eleanor was on her phone.

“Did you see where she ran off to?” Gwen asked.

“No,” Eleanor said. “I think she just got lost in the shuffle. There are a ton of people here and they really pack them in.”

Eleanor looked back at her phone. “She’s not picking up. Do you think she just went to the subway stop?”

At that moment, Dania appeared through the glass doors of the theatre.

“Where were you?” Eleanor asked.

She pointed to her shirt, where a small button with the show’s logo was now attached.

“Yeah, I checked your names too,” Dania said, referring to the promotion taped on the prime-numbered seats in the theatre. “Using A=1 B=2 coding, Gwen is 48 and Eleanor is 70. So no free buttons for you.”

“Did you try Gwyneth?” Gwen asked, as they began to walk away.

“I didn’t,” Dania said, beginning to add it up in her head.

“That’s a clever little promotion,” Eleanor said. “Certainly something they could only do for this show.”

“Yeah,” Gwen said. “Though I didn’t entirely understand it. I can tell he has an attachment to prime numbers or something. There was that one moment in the show where he started listing them while panicking.”

“It’s clearer in the book,” Eleanor explained. “He really likes prime numbers, and all the chapter numbers are just prime numbers. So there’s no chapter 1, or 4, or 6…”

“A lot of the show’s like that. It’s not necessarily that you have to get it but you just, I don’t know, understand that it’s confusing for him. So when he goes to London it’s more scary to watch.”

“It raises the stakes,” Gwen added.

Dania looked up again. “Gwyneth is 102. Not a prime number.”

“Sorry, Gwen.” Eleanor said. “You could try for first and last name.”

Eleanor stopped dead in her tracks.

“I get your dumbfounded shock, but there are like fifty million people walking on this sidewalk, so keep moving,” Gwen said, pulling Eleanor along.

“Sorry,” Eleanor said, moving forward. “But what do you mean you didn’t like it?”

“No, no, it’s not that I didn’t like it or anything.” Gwen paused to think over the show. “I think it was overhyped a bit for me and I just expected a bit more out of it.”

“But you still thought it was good, right?”

“I liked it a lot,” Dania said. “I really liked the lead guy playing Christopher. He did a nice job of playing the character without, you know, making the stuff offensive.”

“I was a little worried after the first scene,” Gwen said. “But it’s a truthful portrayal of what living with autism is like. The projections helped with that as well, creating that really intense, grid-line world for him.”

“Yeah, yeah. The set was incredible!” Eleanor said. “That back wall can do anything. I especially liked how all the set pieces were coming out from the holes in the walls. Like, it’s all a part of his mind or something like that.”

“I think only the train set pieces came from the walls,” Gwen pointed out.

“Still,” Eleanor said. “It was a smart use of the grid walls, besides just projecting stuff onto them.”

Dania nodded in agreement. “I thought the set was one of the best parts of the thing. I loved – loved – when they had that scene with him in the subway? That was awesome to watch. I wish we could have been closer!”

“Oh yeah, that scene is tense,” Eleanor added. “With the lights all crazy and the smoke coming up and everything. I liked all the train bits. When he’s getting on at the beginning and all the people are jerking around together like the train is moving…”

“That part I thought was really well done,” Gwen said. “The choreography with the train – well, all the choreography, really. It’s such a tight-knit cast, they do a great job of telling the story in even the really small moments.”

“There were small moments?” Eleanor asked. “I was more impressed by the really big ones. You know, like drawing all the pictures on the ground and the back wall – ooh, and all the projections of the constellations in that one scene? That was really cool.”

“It was all right,” Gwen said.

The girls fell silent. Somewhere in the distance, a street musician’s mournful saxophone floated in the air.

“I liked the idea of the set.”

Another silence fell. The tapping of Eleanor’s heels echoed as they entered the subway stop.

“I just thought that it…you could have done the show with nothing but a chalkboard floor and one projector in the back and it would have still worked.”

“But they didn’t,” Eleanor said.

“Well, of course they didn’t,” Gwen said. “But it wasn’t necessary – that’s my issue. I though the projections and the walls and the floor and all was really impressive, but it wasn’t all necessary to tell the story.”

“Well, they’re not going to do it on an empty stage, like in Chicago,” Dania said. “This is Broadway.”

“Clearly not,” Gwen said. “But…I don’t know. Like I said, I think it got overhyped for me and I was expecting more out of a billion dollar set.”

“It was a billion dollars?” Dania asked.

“No, it wasn’t literally a billion dollars.”

The girls huddled closer together in the subway station. In the hand of a stranger a few feet away, Dania could see another playbill for “Curious Incident.”

“Well, the London segment was the most impressive part,” Gwen continued, “when they were fully using the giant set as a giant, immersive, high-tech set. But for the other moments it was just in the back while the real important moments happened.”

“Think about that one scene after Christopher gets to the apartment and the dad shows up all mad. It’s a single box light on him while the adults all argue in the darkness around him. That part’s great to watch! It’s a mirroring of all the isolation he feels and his inability to fully grasp what’s going on.”

“Didn’t need a giant blue box to do that.”

“Well, okay, not scenes like that,” Eleanor said. “But that’s the point. The scenes where things are normal are rarer than the moments where everything’s crazy. So they are more significant when everything else is really crazy.”

“But are they?” Gwen asked. “Because that’s what I thought they were going for once we got into Act II. But before that, there had been way more moments where everything was fine than moments where things were crazy. I get if they want to highlight the more still moments because everything is so sensory to Christopher, but if the show isn’t all sensory the entire time…”

“But the script didn’t do that.”

“So they have the set do it!” Eleanor added, her voice rising. “You’re the one always saying that the set needs to help tell the story or whatever.”

“No, the set needs to help tell the story that the script is telling,” Gwen corrected. “If the script doesn’t have Christopher in sensory overload the entire time…”

“But…okay, I see what you’re saying,” Gwen said, backing up as the subway pulled in. “I see. Okay, to correct myself.”

“I just thought the set looked really cool,” Dania said, a little quieter. They were surrounded by strangers as the doors closed.

“Okay, if Christopher is supposed to be in sensory overload the entire time, like only 10% is quiet moments,” Gwen continued, “then the production needs to be sensory overload for 90% of the running time.”

“Yeah. That’s why the set is a huge electronic box.”

“But they’re not using it as a huge electronic box, it just becomes a black box.”

Gwen glared at Dania.”The moments where he’s talking to the people who work at the train stations. Those moments should be crazy tech stuff, to show how he’s reacting to the world around him. Like in the Heathrow segment.”

“Well, if everything is really loud and moving,” Eleanor said, “wouldn’t it just fade into the background after a while?”

“I’m not saying they should do every single moment like the Heathrow one,” Gwen explained. “There are degrees of how wild the world should be. But just standing around talking in a giant…” She motioned towards Dania. “…blue box isn’t the same as immersion in Christopher’s mind.”

“I just think they did do that.”

“Well, fair for you,” Gwen said. “As I said, I think the hype for the show made me expect too much from it. It’s still good, it just could have been great.”

“I thought it was great,” Dania added. “There’s certainly nothing else like it on Broadway right now. And they could never do something this big in Chicago. Right?”

“Probably not,” Gwen said, as she began to mentally load the set into the Goodman Theatre.

“I see what you mean, though. But I did really like how much they could do with that set. When the wall moved I think I actually gasped in the theatre.”

“You did, I heard you,” Eleanor said.

“Also that there were only, like, fifteen people in that entire cast,” Dania continued, glad to finally be talking again. “And they all played, like, eight characters each. That was really cool.”

“I can’t imagine doing that many costume changes in a single show, or that quickly,” Eleanor said.

“I got confused by some of the small details about the mother’s backstory…but then again, the show is built on Christopher not knowing everything, so I guess that makes sense…”

“Yeah,” Eleanor agreed. “I think some parts of it are clearer in the book, or at least it’s clearer what you’re not supposed to understand in the book.”

“Is the book in first-person?” Gwen asked.

“Yeah,” Eleanor said. “It’s as if Christopher wrote the whole thing after the fact, like he’s writing in his journal during the story.”

“Now I want to read it,” Dania added.

“You should, it’s a great book,” Eleanor said. “It was pretty successful when it came out, and now it’s, like, huge because of the play.”

“I’ll have to find it,” Dania said. “I didn’t see it with the other merch for the show.”

“Then again, I was distracted by getting my free button.”

As the subway continued on, Dania and Gwen began independently adding up other people’s names to search for prime numbers. Dania’s last name was 69, Gwen’s last name was 111, Eleanor’s full name was 125, Gwen’s younger sister was 163 altogether…