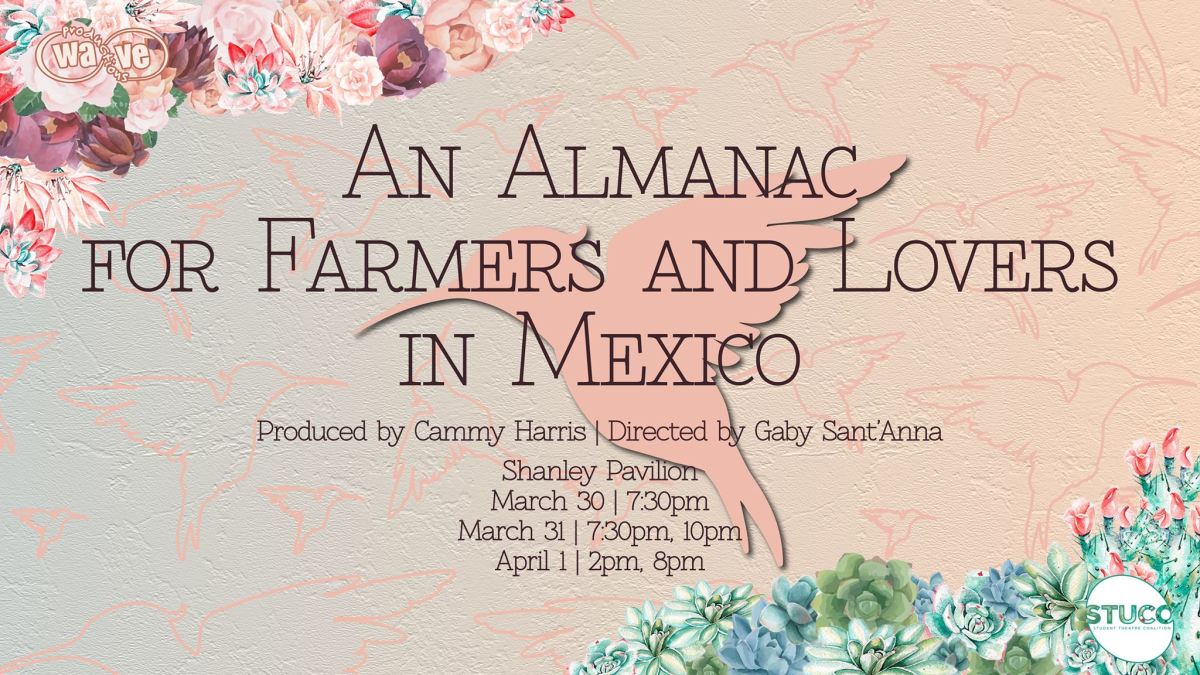 Meet the Hanslick Girls: Gwen, Eleanor and Dania. Created by writer Zach Barr, they are a trio of Northwestern students who always go to see plays together. They may not have the same opinions, but their conversations tend to make for an entertaining read. Recently, the Girls saw “An Almanac for Farmers and Lovers in Mexico,” WAVE Productions’ early spring pocket of magical realism. Let’s hear what they had to say on their way back from the theater…

“Well,” said Gwen, as the applause in Shanley began to die down, “That was certainly something.”

“I’m more of a hummingbird fan, myself,” Dania added.

Dania waved the question away. “Feh.”

Gwen smiled at the exchange. Looking around the room, she caught sight of the cast and crew, congratulating each other after a successful opening night performance. Richly colored clothing that had stood out against the pastel hues of the set now punctuated the black walls of Shanley. All except for Daniel Shuffield, of course – dressed head to toe in the anti-corporate black of his character, a professional protester.

“Let’s head out,” Eleanor said. “It’s getting colder every night.” She wrapped a scarf around her neck.

“Wait, wasn’t there some photographer taking pictures?” Dania asked. “I saw something on Facebook.”

“Oh, Amira?” Gwen explained. “Yeah, I think she was here before the show, not after. But she’ll be here again tomorrow night.”

“Aw, darn,” Dania sighed. She glanced at the space. “Well, I’m not coming back again just to get my picture taken.”

“Do you want a picture on the set?” Eleanor was slowly pulling her phone from her bag.

“Yes.” Dania scampered over to the stage, with Eleanor in pursuit.

Gwen walked slowly back through the space. She had been tossing the play over in her head ever since it began. What about it had she liked? Because certainly, she had liked it. But what about it? The actors? The simple design? The script? The story?

Gwen was still pondering the question when Eleanor and Dania caught up to her at the entry. They zipped their coats and walked out into the –

“Rain?!” Eleanor cried. It was coming down hard, in heavy drops that Dania could feel through the thin lining of her sleeve. The two who had hoods flipped them up, and helped to shield their friend as they hustled through the cold to somewhere warm.

“It rains in Mexico, too,” Gwen said.

“Sure, sure,” Eleanor said. “But it certainly felt warm, at that show.”

“It had a lot of heart, certainly.”

“I just want to meet a nice person and have them turn into a hummingbird and fall in love, guys,” Eleanor sighed, as the rain fell down.

“Don’t we all,” Dania said, gazing up at the rain.

“I would just rather not have to deal – watch out for the puddle – rather not deal with the whole ‘hummingbird curse’ thing if I didn’t have to.”

“I don’t know,” she said. “Maybe stuck on some bus with Mr. Woke and the Farmer Lady.”

Gwen laughed. “I liked those two. They were a clever way of tying the A and B plots together, with the love triangle between the activist and the two women.”

“Well, no, it was so lovely, but the whole time I’m thinking ‘No! You have to get together with Altitude Sickness Girl!’”

“I didn’t totally get her,” Dania admitted. “I mean, altitude sickness is real, but it doesn’t, like, liquidate your bones or anything.”

“Well, it also doesn’t make you leave your own body momentarily,” Eleanor added, defensively. “Dania, I feel like you weren’t in the right sunny mood for the show.”

“Well, it’s not very sunny out right now, is it?” Dania shook her feet, the water in her socks slowly beginning to creep up her calves.

“What?” Eleanor said. The thunder roared.

Dania ran ahead, motioning for the others to follow. Gwen ran behind, with Eleanor trailing at the back. As she traversed the puddles around the loading docks to the library, she meditated on Dania’s dismissal of the production. What could be wrong with a play as simple as the old “boy meets girl, boy becomes bird, girl convinces judge boy is bird, girl’s friend meets farmer” story? The actors had been exceptionally funny within the play’s very dry style of humor – the only dry thing on campus right now, Eleanor thought – especially the knockout performance from Sophia Carbonell as the dismissive judge. Maybe she hadn’t liked the play’s story, which Eleanor knew was a little confusing to follow. But that was a minor flaw in the face of such an enjoyable evening.

Eleanor left a wet handprint on the glass panes of the revolving door, as she spun into the warmth of the Norris Center. Dania and Gwen had arrived, and were still discussing the performance.

“Like, who was the narrator girl with the baby? I didn’t totally understand that part.”

“It’s like the Patron Saint of Love, or People Who Get Lost, or something. I think ‘Patron Saint’ is the most important element, for the story.”

“I guess…San Cristobal was a mother?” Gwen said, shrugging.

“I mean, whatever,” Dania said, turning towards the stairs. “Chick can have a baby, that’s fine with me.”

“My real questions were with the decision to mime most of the props in the show,” Gwen said. “I don’t know the script, maybe it calls for everything to be mimed. But then the real knife came out, and the real mangoes…it got a little confusing.”

“Well, wasn’t the mango real, compared to the other stuff being in her head?” Eleanor said.

“But the…wait, no, maybe the real items were the fictional ones, since the food they make in that one scene is fake.”

“Why would the real ones be the ones that aren’t there?” Dania asked.

“Well, it’s all dream-like, right?” Eleanor suggested. “I don’t know, Gwen, you can probably speak more to that.”

“It’s magical realism, sure,” Gwen began. “It’s all very simple, utilitarian. Only what’s absolutely necessary to tell the story: an empty space, the chairs, the table, the radio…”

“Did you notice it kept playing during one of the scenes when it wasn’t there?” Dania remembered.

“The flowers and the clothes at the back. The whole set had this gardening feel to it. The production would probably work well outside, in the Koch Gardens or somewhere like that.”

“It’s also massive,” Eleanor said. “Just like the outdoors. And it’s all about farming, you know. So that makes sense.”

“Sure,” Gwen agreed. “And the empty space allows them to transition easily between book scenes and the movement sequences.”

“Lot of movement sequences in that one,” Dania said.

“Neither does Eleanor,” Dania said, turning to order at Norbucks.

“When have I ever said I hate dance sequences?” Eleanor defended.

“Not dance,” Dania repeated. She waved her arms around slightly. “Movement.”

“Okay, some of them,” Eleanor said. “Not just all movement sequences outright. You know, if they work, like these did, they’re fine with me. It’s just the pretentious ones that get to me…”

Gwen smiled. “It’s funny you hated the – ‘hated’ the three lovers dance, Eleanor. I thought it was nice and sweet.”

“Well, she gets her man back and the wedding goes on, right?” Eleanor said.

“It’s true, though, that there doesn’t seem to be some kind of grand cultural moral or message under it,” Gwen said. “A rarity, for a WAVE production.”

“There were morals,” Eleanor said. “Maybe not ‘reform everything’ kinds of things, but it’s always good to see a story set in Mexico that actually addresses the cultural differences without stooping to having the characters consume them.”

“I mean, they do all dance together to some crazy wedding music at the very end,” Dania said.

“But, you know, the whole Coke can scene is there, and stuff.”

“Eh, I don’t think it was aiming to be a world-alterer,” Gwen said, “or to leave the audience shook and questioning their lives.”

“Exactly,” Eleanor said. “I enjoyed a little shot in the arm of summer right about now. That’s what I needed, and it provided. And hey…” She glanced outside, where the rain continued. “I think a lot of people need that right about now.”

“Good timing, on their part,” Gwen commented. “Programming the show during a rainstorm. WAVE truly is magic.”

“Well, you liked something in it, right?” Eleanor asked.

“You know,” Gwen said, “I was surprised how funny it was. I didn’t go in expecting anything, really, but…”

“It was so funny! So weird and funny. Like the judge and her changing hours of operation…”

“Okay, that made no sense,” Dania added, “but I liked it. Good example.”

“And the protester was a nice parody of protesters in general,” Gwen said.

“Especially considering how prevalent activism is right now,” Eleanor said. “And necessarily so.”

“Hey, I can praise the show for being a story about Mexican and American relationships, at least,” Dania said. “Talk about topicality.”

“It really does seem like the whole StuCo season this year was picked almost expecting it would have to respond to a terrible political atmosphere,” Gwen noted.

“Funny how these things happen,” Eleanor said, with a half smile, as Dania picked up her drink from Norbucks. Outside, the rain was just starting to let up, just a touch.

Two weeks later, Dania knocked on the door of the bathroom the three girls shared in their apartment.

“Eleanor? Are you done? I need to get to the mirror.”

The door opened. Eleanor, recently out of the shower, stared at Dania with a deadened, serious look.

“I am in a towel,” she quoted, a perfect recreation of Carbonell.

Eleanor laughed and walked out, but as she looked back, she thought she caught a glimpse of Dania smiling reflected in the mirror.