“There’s a whole downstairs part, too,” Dania said, leading the trio around the curved staircase. As they descended, Gwen caught sight of the inscribed poem from museum founder Dr. Margaret Burroughs:

What shall I tell my children who are Black

of what it means to be a captive in this dark skin?

They continued down into the sparse lower level of the DuSable Museum, where a series of prefab walls had been set up in the empty corridor, with paintings hung on each one.

“This is…’The Love Affair Continues…'” Eleanor read. “Engage with art from across the African Diaspora in this exhibition featuring the holdings of Diaspora Rhythms, a Chicago-based collector group.”

“Dope,” Dania said, walking forward. “They use this lower level for all sorts of temporary things.”

Moving through the quiet gallery, they caught sight of one small detail regarding almost all of the portraits: most gazed intently back at the viewer, with a fixed forward glance that seemed to shift in emotion the longer that Gwen stood back at them. Images of women, abstractly sketched onto canvas and given space to breathe.

Dania’s attention was briefly held by a small sculpture – an abstract collection of metal fringes that, upon viewing from the correct angle, morphed into the image of a face. The sculpture was, like many of the other pieces, untitled.

Gwen had always been uneasy in art galleries. Alone with the artwork, she felt a tension of foreboding. Her experience in theatre, communing with an audience, had given her a hyper-awareness of an audience’s experience. How dwarfish she felt, wandering through the spacious halls of a gallery, a lone audience wandering the stage and feeling the stare of the paintings on her spine, more observed than observer. While the presence of Dania and Eleanor kept that feeling mostly at bay here, she could still sense the artworks passing judgement on her.

“I like this one,” Eleanor said, indicating a deep canvas depicting a woman, white robes and wrap, holding a rose behind her back. Dania and Gwen silently acknowledged the painting, and turned to walk back out of the gallery.

“Is it just this area?” Gwen asked. Through another door, the permanent exhibit “Freedom, Resistance, and the Journey Towards Equality” could be seen. 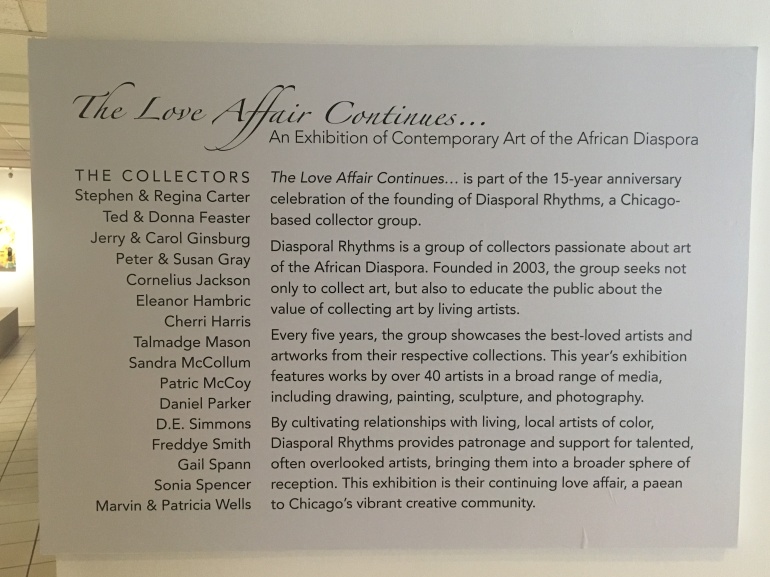 Sure enough, as Dania and the others turned into the second room of the exhibit –– and past a doorway where the list of the exhibition collectors’ names were listed –– one central painting showcased the 44th President’s recognizable face. The art in this gallery seemed more abstract, less rooted in portraiture. What paintings were of faces were distorted, or clearly not posed in quite the same way.

Dania read the plaque at the edge of Obama’s picture –– a 2017 work by Chantala Kommanivanh entitled The Last President. She stepped back again to take in the linework across the president’s face, wrinkled and speckled with white to indicate the latter days of his administration.

“I was wondering when Obama would show up in the DuSable Museum,” Gwen said. “He’s such a major part of Chicago history.”

“What is this,” Eleanor said suddenly, turning to the adjoining wall. 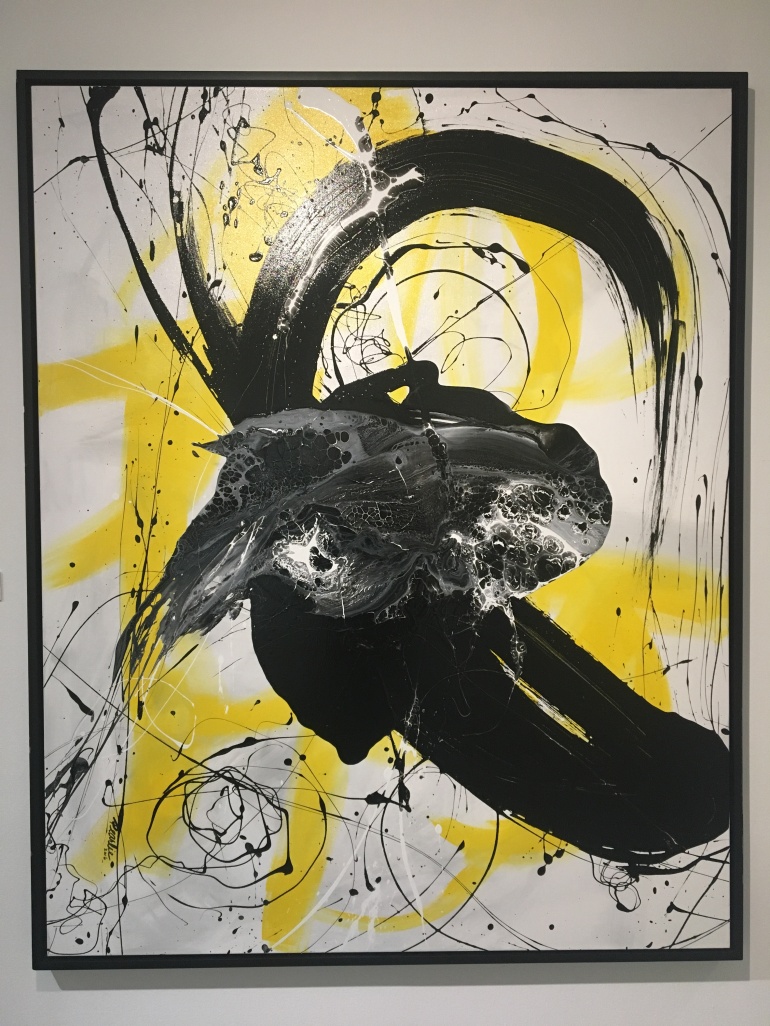 Just to the right of the doorway, an abstract painting of black, white, and gold hung on the wall. A thick dark brush had cut directly through the center of the painting, anchoring the eye between the swirls of Pollock-tossed paint around the canvas. From every direction, flecks of black spun off, rocketing towards the thin frame around the painting, giving the image a sense of motion, even as it stood immobile on the wall.

“Have you seen it before?” Gwen asked.

“No, but it’s…” Eleanor began, before again getting lost in the textures. The only white paint, beyond the background, was mixed into the very center of the image –– a bubbling seascape of waves that lifted the painting off the canvas, giving dimensionality to the image. 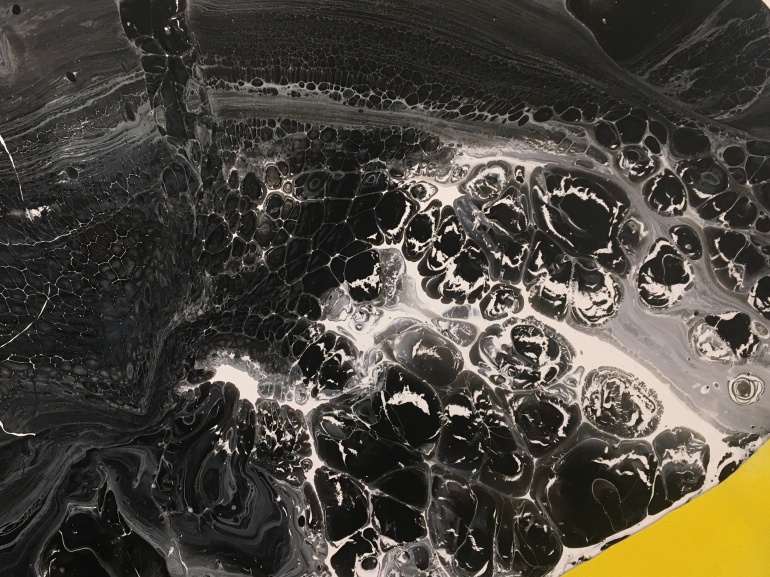 “It has a very distinct composition,” Gwen agreed. “The way that big swoop of paint up at the top right frames the rest of the image. How it’s just slightly off-center, but not enough to bother the viewer.”

Dania looked askance at the image.”It’s okay,” she said. “What is it supposed to be?”

“It’s abstract, you can see whatever you want in it,” Eleanor said.

“I see…something breaking apart,” Eleanor said. “Like everything has been confined to the center of the canvas, but now it has the power to move out towards the edges of the image. We’re just seeing the beginning of the process here. There’s a longer story both before and after the one presented.”

“…right,” Dania murmured, before walking off to another painting. 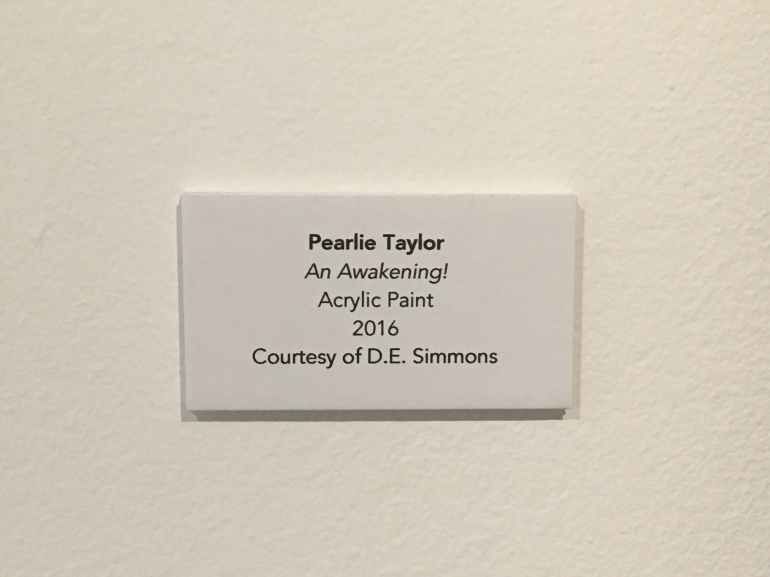 “Yes, an awakening!” Eleanor said, her face lighting up. “That’s what it is!”

“The yellow in the background certainly gives an air of freshness, and sunshine.”

Looking again at the painting with renewed resolve about its content, Eleanor noticed for the first time the centrality of a single spot of yellow: right in the upper portion of the black mass in the center. It as positioned in such a way, among the unplanned assortment of paint, as to resemble, when the silhouette of the black was taken into account… 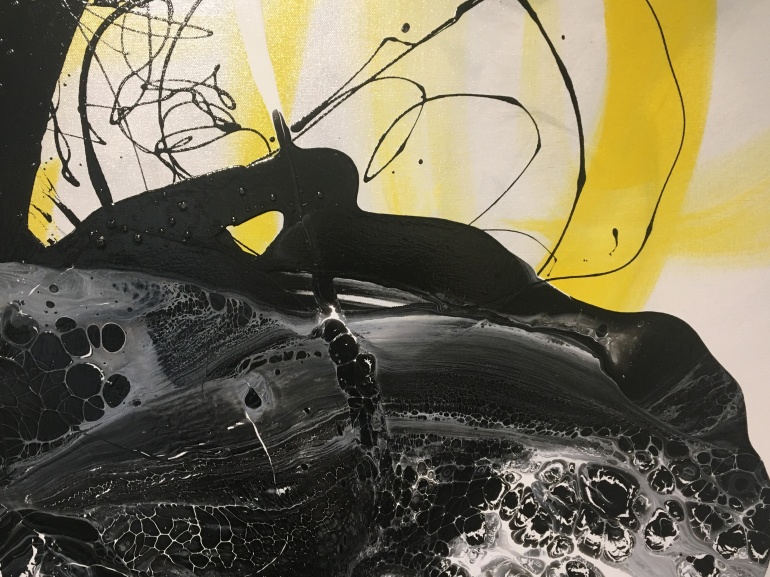 “Don’t you see the face in the image?” Eleanor pointed towards the nose, drawing her finger along the face to indicate what she saw to Gwen.

“It’s like, this is the head here,” Eleanor indicated. “With the neck here, and I support this large part up here…”

Eleanor stepped back to look at the whole image again. The curve of black paint that framed the center, as Gwen put it, emanated directly from the head of the image –– disintegrating as it moved further from the mind of the painting’s subject.

“Whatever works for you,” Gwen said. “I don’t think there’s a correct interpretation. Like you said, it’s abstract.”

“I know, I get it,” Eleanor said. “I’m trying to piece together what I think about the painting.”

“You can like something for aesthetic reasons,” Gwen said. “The best art is that which speaks to something that we hold to be true, even if we can’t always articulate it with words.”

Gwen shrugged. She wasn’t wrong. In a room full of abstraction, it did seem a touch odd that this particular image would so captivate Eleanor’s attention. For Gwen’s money, either the Obama portrait, or the nearby painting The Notion Of Being Colored –– a study of blackness done entirely with white paint –– were her favorite within the exhibit.

Dania, for her part, had already made a survey of the rest of the room. A picture of trumpeter Miles Davis caught her eye, as did a cubist image of a man carrying a small child out of a hurricane. But beyond those, the room was filled with various and uniformly uninterpretable reflections of blackness, none more or less outstanding than the tricolor work that Eleanor was so enraptured by. 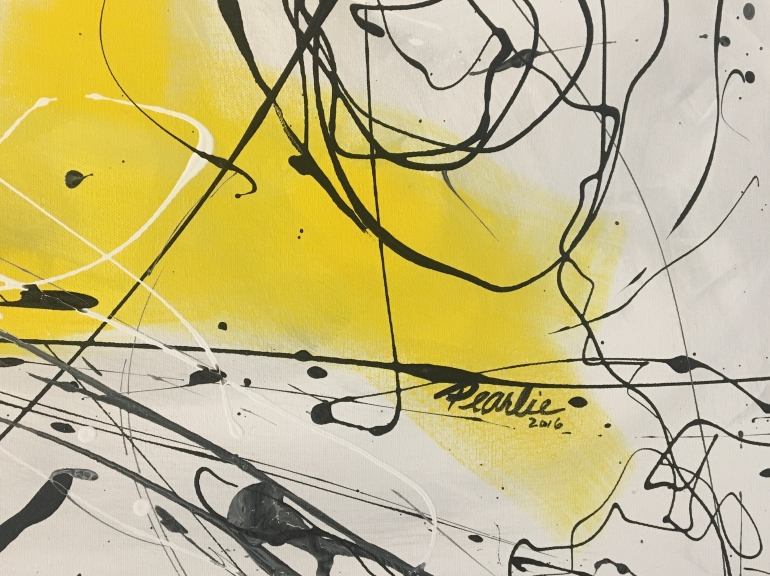 Eleanor had turned her attention to the various strings of paint that orbited around the face at center –– errant debris of the awakening happening throughout the image. In looking over the squiggles that snaked around the painting (and catching Pearlie’s signature, tucked into the bottom left-hand corner), Eleanor did catch a few strings of white paint, standing out against the yellow clouds in the background, and fading away behind the vibrant ebony that immediately took focus.

“Blackness in focus…” Eleanor said to herself.

It was, of course, impossible to ignore the context in which the painting was being showcased. Not just as part of a collection of other “diasporal” art, but within the larger context of the DuSable Museum itself. The front rooms of the museum were a tribute to founder Dr. Margaret Burroughs, and included many of her woodcuts. Dark and cubist forms of black life, implanted onto white backgrounds and being allowed the space to breathe, elevated into a space where the viewer had no other option but to see them.

The context of Taylor’s background –– her time spent raising a large family, being widowed and turning to art, her late-life success within the Chicago artistic scene, a slow evolution from landscapes to more abstract art –– these were not details that Eleanor possessed as she sat on a bench, giving herself to the artwork, and allowing it to awaken something in her. And yet, there was a recognition of some story, some narrative, that brought this painting to life. Through its abstraction, Eleanor felt a kindred connection to Taylor’s strength and character. Though, even that connection itself was abstract enough to be another one of the artist’s paintings.

“I think it’s an orca whale,” Dania said, popping up behind Eleanor’s shoulder. “Like a big, abstract orca whale jumping up in front of the sun.”

“Come on, we should head back upstairs,” Gwen called from the entrance. 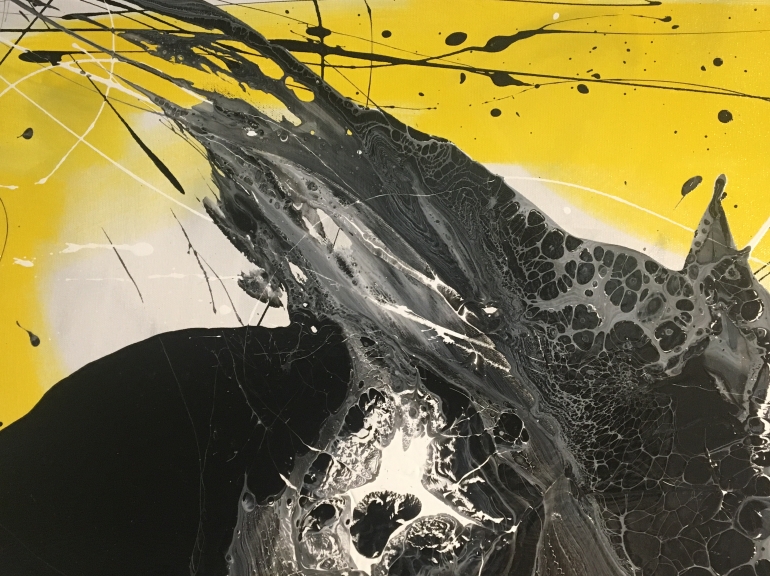 Eleanor stood as Dania bounded away. She didn’t know how long the exhibit would be in residence, and glanced once again at An Awakening! as though it might be her last time seeing it. Abstract though it was, and impossible to recollect perfectly in her mind, she knew she would hold on to something about the image, whatever it might be. Something to keep her resilient in the coming days, weeks. Some level of empathy that she knew Taylor shared. As she left the room, she whispered a silent gratitude to Taylor, for sharing her art –– and, in doing so, sharing herself.

The author wishes to thank the DuSable Museum of African American History, currently hosting the exhibition “The Love Affair Continues…,” curated with Diasporal Rhythms, in which Mrs. Taylor’s work appears.

All photos by the author.