“I’ve never understood why modern art needs so much space around it.”

Dania bristled at the bare walls and clear floors as she stepped into the front room of the gallery. The empty white surrounding her invited the rainbow of colors utilized in Jeffrey Gibson’s art to burst from the canvases that dotted the room. 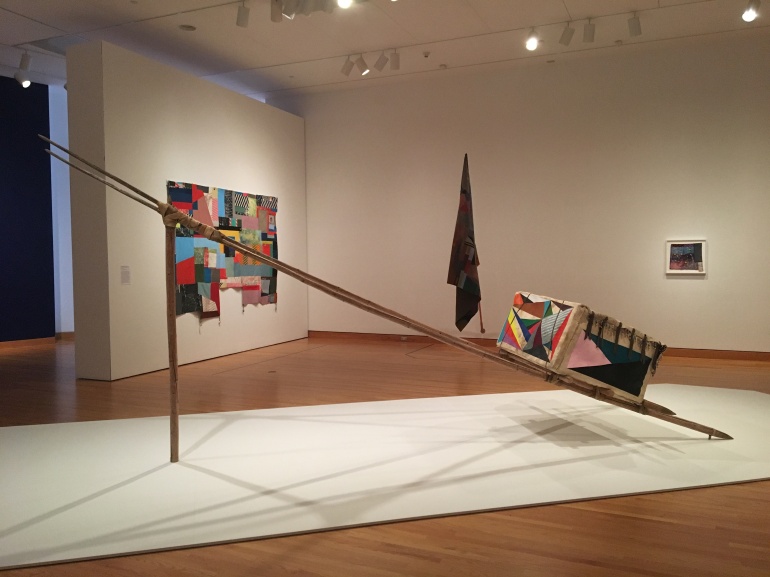 Of course, “canvas” was doing the work a disservice, as Dania later discovered. Rather than traditional canvas, most of Gibson’s art utilized deer rawhide and pelt, which allowed the slightest glimpse through the image, after taking in the geometry on the surface. Beyond providing each piece with further dimensionality, the material also served as a nod towards Gibson’s multifaceted identity: a queer man of Native American descent, formerly a painter and now branching out into sculpture, performance, and even music.

“Look at these,” Gwen cooed. She led the trio over to a glass case, where two sculptures resided: a pair of shaving mirrors, old century models, both with deerskin wrapped over the mirror face. All that one could see in the mirror –– in Gibson’s clever subversion –– was a collage of painted colors and shapes.

“Very clever,” Gwen murmured, turning away to read the exhibit description on a nearby wall. Eleanor, for her part, lingered a moment longer beside the mirrors, before wandering towards the neon glow coming from the next room.

Dania, surprising herself, remained at the mirrors for some time.

This happens every time, she grumbled internally. It had happened back in Chicago’s modern art museums as well: the sense of a wall growing, between Eleanor and Gwen’s vocal confirmations about understanding the art, and Dania’s mute acquiescence to its unobservable importance. Here, in Seattle, a silent hope had festered that perhaps, under a new climate, she would be able to glimpse part of what Gwen and Eleanor seemed to pick up so naturally.

With eyes transfixed on the rawhide covering the mirror, Dania saw very little reflected back towards her.

“There’s such a care given to every detail of the costume here,” Gwen commented.

The three observers were engaged in conversation over four of the exhibit’s current residents –– a tetraptych of dolls, ranging from two to four feet, and dressed extravagantly in beads and bangles. The tallest had a slogan embedded onto its chest, spelled out in the bead work: BIRDS OF A FEATHER. From around the corner, the familiar strains of The Four Seasons’ “Oh, What A Night” could be heard.

“It’s such a strong parallel, and yet you’d never expect it,” Eleanor summarized. “Queer club culture and Native American ceremonial garb. The synthesis is quite stunning.”

Gwen, nodding, led the way back to where a group of punching bags –– each bedazzled with beads and gently billowing fringe –– hung from the ceiling. “There’s a sense of desperation in the air,” she mused. “That fervent desire to be seen, to not disappear. Both queer culture and Native American culture have been subject to so much erasure and suppression over history. Gibson’s locking on to a salient parallel that links them.”

“And considering that he lives between the two?” added Eleanor. “It’s no wonder he moved into this more holistic style of artistic creation.”

The words continued to soar past Dania –– she made attempts to latch onto a phrase here, an idea there, but Eleanor and Gwen spoke as much for themselves as each other, and barely for Dania at all.

It wasn’t as though Dania could blame them. Gibson’s art, while aesthetically beautiful, seemed impenetrable. If it had been an inevitability, as Eleanor suggested, that would certainly explain it –– art made for the benefit of the artist as much as for the audience, for the culture of the past as much as for the culture of the future. Had Dania the language to describe her uneasiness with the surrounding objects, voicing them out loud would have been the way to sort the feelings effectively.

Walking into another room, they were confronted with a pair of figures in the center of the room. The cloth in both of their garments spilled out onto the floor, and the warm light of the gallery glinted off their glass heads.

“These are based on the Native American concept of the ‘guardian spirit,'” droned a tour guide at the other side of the room. “One of their beliefs is that the spirit of ancestors is better understood in death, rather than in life. So Gibson took this and brought two ancestors into the gallery, in his own way.”

Eleanor and Gwen remained with the ancestors for some time, arguing the significance of each bead on their wraps and each bend in their skulls. Dania, however, was pulled to the other side of the room, where a series of three paintings caught her attention like nothing else in the exhibit so far. Placed side by side, each was a canvas –– perhaps deer hide?, Dania recalled –– filled with tessellated triangles and diamonds. The linework was symmetrical, but had been filled in unevenly, giving each piece a sense of off-kilter movement. Though the work that went into them was less apparent than the intricate detailing of the dolls and punching bags in the previous room, the trio of paintings matched the energy of Gibson’s other works.

It was one of these panels, not the trio together, that had yanked Dania away from her friends. The leftmost paintings were studies in red and brown, but it was the study in black at the right that pulled Dania.

The exhibition hall was exceptionally well lit, especially when compared to the dimmer galleries just adjacent to the entrance. And yet, within this illumination, Dania investigated the painting –– a nearby plaque gave its title as “Raven” –– out of an assuredness that the blue triangles within the painting were glowing like blacklights.

To her shock, the painting was lit the same as any other in the gallery. The rich cobalt of Gibson’s canvas provided its own announcement. Dania glanced around the room, at the by-now-familiar works that used beads to write out song lyrics, and another arrangement of gilded punching bags.

The room surveyed, Dania returned to “Raven.” The painting didn’t seem to be breaking any new ground –– sure enough, there were other paintings in the gallery that mirrored its calculated structure of triangles. And yet, something drew Dania to it implicitly.

She followed the path of each line across the canvas, how cleanly the colors passed by each other. As with the rawhide surface itself, the layers of paint were not entirely opaque, and afforded each new layer with a tint from those that had come before. Across the image, each triangle sunk into deeper layers of blue, red, green, black, the one spot where purple burst through. In the context of the gallery’s other inhabitants, Dania constructed an image of Gibson creating this painting –– adding layers and layers of paint, calculating the new colors to be created from overlapping and melding, allowing each angled panel of the image to tell its own story, before combining together to present those stories to the viewer…

She turned. Eleanor and Gwen stood adjacent, observing the panel themselves.

“Do you want to see the last two rooms?” Gwen asked. “There’s a video of Gibson chanting in the space, and a few more wall pieces at the back.”

“Sure,” Dania said. She cocked an ear towards the back room. Behind a sheer curtain of rainbow colors, the sounds of chanting and drumming could be heard. Dania was hesitant to go in –– performance art in museum settings made her nervous –– but if it was a recording she’d be fine.

She glanced once again at “Raven,” taking in the layers as before, though the reverie had ended.

“These are a little simpler than his other works,” Eleanor said. “But the process is still so apparent there.”

“See how the colors change in every layer?” Dania pointed out. “So you end up with that purple in the corner, where the blue and red overlap?”

“I do,” said Eleanor. “I wonder, are these from before the paintings in the front room?”

They weren’t –– the exhibit’s first room contained work from around 2011-2012, while these three panels were all from 2016. Still, Dania could understand Eleanor’s suspicions that they were earlier work.

In the back rooms, on her own, Dania paused to observe a pair of artworks on the wall, both among the most recent in the exhibit.

The pair, both hanging images constructed from thousands of beads, were entitled “Im Ein Ani Li, Mi Li – Hillel” and “Love.” Both, the nearby plaques clarified, were commissions, from other organizations that had requested Gibson’s work.

The mixture of Hebrew and Chinese imagery into the exhibit, rendered so cleanly in Gibson’s trademark style, seemed at odds with everything up to that point. Dania reflected on the clear America-centered commentary of a beaded curtain, hanging in the front room, with the James Baldwin quote: AMERICAN HISTORY IS LONGER, LARGER, MORE BEAUTIFUL, AND MORE TERRIBLE THAN ANYTHING ANYONE HAS EVER SAID ABOUT IT. Gibson’s art seemed calibrated to the specific tensions within American culture that had pushed both halves of his identity – queer and native –– to the sidelines.

Dania recalled what Gwen had said about the dolls in the first room, about the desire to be seen in the face of so much erasure. As she walked back through the exhibit, Dania took more careful note of each figure, and how it interrupted the empty space, demanding the attention of the viewer. The gentle sway of the hanging sandbags kept them in motion, and the distant hum of Gibson’s curated playlist for the exhibit (now blasting “Sir Duke” from an adjoining reading room) kept the air from stagnating.

Just before joining Eleanor and Gwen outside, Dania stopped at another set of dolls, dressed in similarly gaudy manners, and led by a figure titled “Like A Hammer,” from which the exhibit took its name.

Dania countered the figures, taking note of each layered fabric on their ceremonial tunics, the massive bells that surely rang out if the figure could walk. At the back, a doll named “Here It Comes” captured Dania’s attention in the same way “Raven” had. 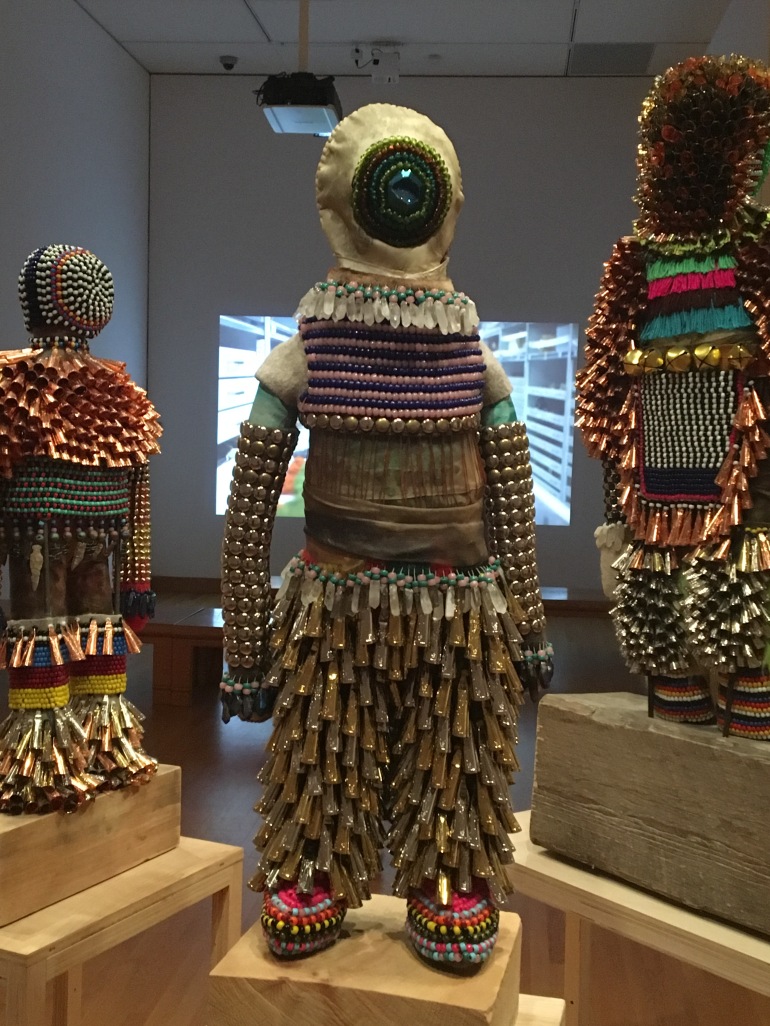 Dania recalled the original quartet of figures –– still grinning, in their way, from across the room –– and the relative abstraction of their outfits. Observing “Here It Comes” again, Dania began to build the narrative around the doll more concretely. The layered and jangling pants. The bicep-length arm warmers. The crop-top of beads. All leading upwards to a comparatively unadorned head with one massive eye at the center.

Image Credit: Photographs by the author, taken at the Seattle Art Museum on May 4, 2019. All art belongs to Jeffrey Gibson.

Jeffrey Gibson: Like A Hammer is owned by the Denver Art Museum.