They had come on a quiet day in the middle of the week, which meant that the Honolulu Museum of Art was nearly empty. As they walked the labyrinthine villa that made up the museum’s sprawling campus, Dania and Eleanor walked close together, in an agoraphobic bond.

“I thought there would be more art by Hawaiian artists here,” Gwen muttered, passing another room of Japanese block prints.

“Why?” Eleanor asked. “It’s not like the Art Institute has a section dedicated to Chicago artists.”

“They have a collection, though,” said Gwen. “Besides, it’s different. Wouldn’t they want to feature local artists, if the culture is being eaten by tourists so much?”

“You need to move on from the tourists, Gwen,” Dania said. “I know O Nā Lani freaked you out, or whatever, but there’s obviously more to Hawaii than fighting against tourism.”

“Well, yeah, that’s why I wanted to see native painters,” Gwen replied. “Something separate, made for its own sake.”

“What about up there?”

Eleanor pointed to a high staircase, running along the wall across from the food court. The rest of the museum had been single-story, but the building with the stairs was at least three flights. A sign at the bottom step beckoned: Arts of Hawai’i.

“Bingo,” Gwen said, leading the way up the steps.

“Why keep one room so far away from everything else?” Dania wondered.

“Maybe it’s to weed people out,” Eleanor said. “Only the true fans of art will make the trek to the third floor!”

Through the glass at the top of the stairs, the gallery was shrouded in dim light. As Gwen opened the door and took a tentative step inside, sensors raised the lights throughout the room. The air carried every sound, to echo against every wall.

“Are we the only ones in here?” Eleanor said, her voice spreading through the hall.

“I think so?” Dania whispered.

“Oh, wow,” Eleanor gulped. “I didn’t want to be right about weeding them out.”

The trio tentatively explored the gallery –– a miniature of the King Kamehameha I statue, glazed pottery with dripping edges, an intricately detailed tapestry depicting daily life. Gwen walked confidently, unfazed by the silence of the room. Eleanor and Dania stepped delicately, as quietly as they could.

“It’s modern art,” Eleanor said to Dania. “The spookiest art to be alone with.”

“You’re telling me,” Dania agreed. “All abstract shapes and metaphor.”

“I like that one,” said Eleanor, indicating the canvas where Gwen had stopped.

It was a larger piece, one of the biggest in the gallery –– about six feet by eight. The dark palette made it a clear standout from the brighter images in the room, not to mention its distressed, torn-apart imagery.

The three stood in front of the painting, taking in the various details scattered around the canvas. After a moment’s silence, Dania let out an involuntary shriek, which cascaded through the room.

“What the––keep your voice down!” Gwen growled.

“I’m sorry, I––” Dania said, tampering her voice. “I just didn’t notice the face in the middle immediately.” 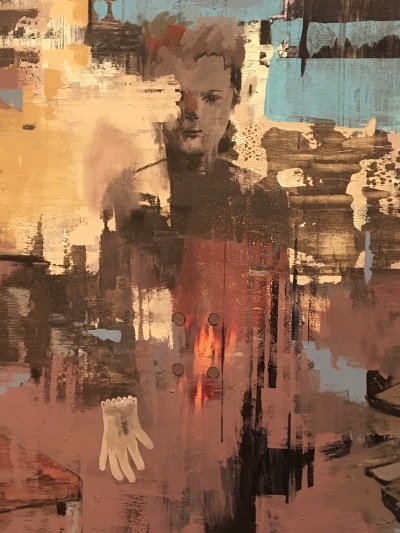 “The ghost girl?” Eleanor said. “She’s the center of the image.”

“I was focused on the chairs!” said Dania. “They’re the part that’s actually in focus!”

“The books, as well,” Gwen pointed out. “It’s all the objects in the room we can see, the details. But the overall picture remains blurry.”

Eleanor grinned, and dryly rolled her eyes. “What a confidently meaningful sentence, Gwen.”

“Well, you know it’s a painting with a deeper meaning, obviously,” Gwen said. “Look at the label.”

Eleanor leaned in to read the label. Memory For Forgetfulness was the title –– the painter, Reem Bassous, was Lebanese and living in Hawai’i. Bassous frequently draws on the political undercurrents of Hawai’i to interrogate her own experience with political instability, growing up in Beirut…

As Eleanor read, Dania took a few steps back. From the bottom half, the painting didn’t read as that abstract. Certainly, colors were splotched around the canvas, but impressionism had employed similar methods of capturing light. Books, collected into  piles at the down-left and up-right corner of the painting seemed heavy, like they’d been pushed to the ground from an unseen table, by an unknown force.

Even the ghost girl, paralyzed just right of center, had fully formed feet and calves, which stretched up into the emptiness where her torso would be. A glove hovered at her hip –– a white Miro-like squiggle, save for the lace fringe at the wrist –– while a square of four buttons gave her coat some modest definition at her center.

“Do you think she’s outside?” Eleanor wondered. “The ghost girl?”

“I mean, originally it looked like everything was indoors, because the bottom edges of the floor are so clear.” Eleanor traced, in the air, the diagonal path of the puce floor in the middle of the painting. “But then you look at those thick, sky-blue bands across the upper third, and it really starts to look like…well, the sky.”

“I agree,” Gwen said. “The painting certainly eludes traditional interpretation and comprehension. Consider the title: Memory For Forgetfulness. It’s such a contradictory phrase, remembering the act of forgetting? My interpretation is that the discord across the canvas is a physical representation of the artist being unable to fill in key details about the scene.”

“Hm,” Dania said, taking in Gwen’s words. “Or,” she added, “there’s sky because there are holes in the wall.” 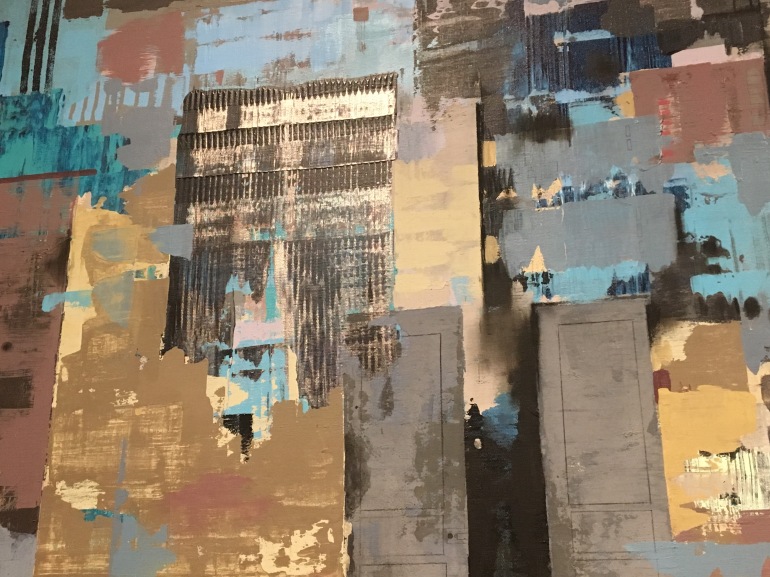 Gwen frowned. The painting had stopped her for its distinctly modernist aesthetics, compared with the relative literalism of the rest of the gallery. Elements of the painting demanded reconciliation that never seemed to come. In the upper left, a black and grey rectangle looked, from a distance, like a photograph of a building that had been lacquered onto the canvas. But, on further reflection, it was merely paint.

Gwen walked to the side of the painting. She looked at it from an angle, making note of the texture of the canvas. Surprisingly, the canvas was almost entirely flat –– for all the seemingly torn coats of dried paint, not even a thin fringe of material stuck off the front. Bassous’ process had been cleaner than Gwen thought. For all the chaos in the painting’s image, the object itself was the product of careful formation.

“Doesn’t it look a little bit like an old billboard?” asked Dania.

“Kinda,” Eleanor agreed. “Where the image is torn off, and you can sort of see the older image beneath it?”

“Exactly,” said Dania. “Maybe that’s the idea, parts of older memories are tearing through the newer ones.

Eleanor nodded. “If you focus on the distance in space, how close things are supposed to be to the viewer, things get more dilapidated the further away they are. These books are clear, but they’re really close. But the back wall…”

“That’s true,” Dania said. “Although those doors at the back are pretty clean.”

“Are they doors? I though they were windows.”

“No, that’s definitely a door,” Dania repeated. “See, it’s open a little, that’s the black part in the middle.”

Eleanor tilted her head. “I assumed that was just part of the chaos, not a part of the…scene, or whatever.”

“Yeah, it’s an open door, and the space leads downward to the space in-between the two chairs,” Dania explained. “Where that little flower is.”

“Yeah, that’s the only part that’s green, isn’t it?” Eleanor said. “Those little flowers…and that one brushstroke near the top. Breaks the mood…”

“What do you think the flowers are? Hope?”

“No, it’s a Lebanese thing. It’s a symbol from their coffee cups,” Eleanor explained. “It’s on the label.”

“There was a poet who wanted the country to return to normalcy, and expressed that in a poem asking for a cup of coffee,” Eleanor explained.

“There’s a lot going on,” Eleanor said. “If you think about it in the context of the Lebanese Civil War, and the experience a child would have going through it…”

“How old was Bassous? When it all happened?”

“Essentially,” Eleanor said. She took another step back from the canvas. “Maybe the little girl is her.”

“Perhaps it’s the childhood she didn’t get to have,” Dania said.

“When your memories of the war are that foundational, that early in your life,” Gwen said, “it’s unlikely that she has more than a few specific memories of it. Just some particular moments that stood out to her.”

“Moments like, these two chairs,” Dania said. “Or these piles of books.”

“It’s not a stretch to say that the painting is representative of an internal struggle, much more than an external one,” Gwen said. “It represents Bassous coming to terms with the lasting impact of her childhood in Beirut, rather than the childhood itself.”

“This is probably what it feels like when you reflect on an event like that,” Eleanor said. “All jumble and torn up.”

“But it’s not, like, nothing,” Dania pointed out. “There’s still very clearly a room here. The child’s face is almost entirely there, except the missing eye. Even if there’s a mess outside, the really important pieces of the image are there. The books. The coffee symbols.”

“The private things are clear,” Gwen said. “While the world outside is abstracted, and juts into the space.”

“Or, is this the private invading the public?” Eleanor asked. “It’s difficult to tell which one is the deeper layer of the painting.”

They fell quiet, standing before the painting and parsing the tiny details in the massive canvas. The gallery remained silent. The images in Bassous’ painting were loud enough.