“You ever have those art pieces that you just sorta wander back to every time you’re here?” Dania asked.

“Not necessarily a favorite,” Dania murmured, as they descended into the courtyard of marble statues that marked the beginning of the “American Art Before 1900” wing. “Just one that you like and you always go back to to each time you’re here. I don’t know if its any good, but it’s… a nice sculpture, I guess?”

“You find it aesthetically pleasing,” Gwen phrased. “I understand.” She stopped in front of the scale model of Abraham Lincoln, by Daniel Chester French – a perfect, albeit miniature, replica of the giant that haunted the Lincoln Memorial in D.C. “I always stop to admire this one. Look at the tension in his fingers as he grips the chair.”

“That’s, like, a great work of art, though,” Dania added. “It’s famous. I don’t know if anyone even knows about mine. Like I said, it might not be good.”

“Which one is it?” Eleanor asked, but Dania was already walking into the room behind Lincoln. Past a red entryway where a few portraits hung and into a sunny room with decorative silver crockery was spotlit, Dania veered to the right. Two statues, about two-and-a-half feet high, were encased under glass, their marble texture sticking out in the polished, slick art that surrounded them.

“These ones,” Dania said. In the dim reflection of the glass, she saw Eleanor and Gwen walk up behind her, as she continued to gaze on the statues.

Gwen bent down to read the nameplate.

“This is the one?” Eleanor asked. It was puzzling – what did Dania see in the statues, no more prominently placed than any other work in the American wing? Then again, she supposed Dania wouldn’t be able to answer that question any better, the way she had stammered about her attraction to them.

“I know, right?” Dania said. “I don’t know what it is, but I like this one. Maybe it’s the fact that they look like those statues in the front that we walked past, of the Greek people. But these two are all modern, they have gears and stuff.”

“It says that Stebbins studied in Rome,” Gwen mentioned. “She emulated the style of sculpture that you’d see in classical Grecian and Roman statues. The fact that it’s really one block of marble is impressive enough.”

“Aren’t all those ones out in the atrium made of marble as well?” Eleanor asked. She glanced back through the entry hall, catching a glimpse of the white courtyard, before turning her attention to the information card Gwen had read.

“I suppose so,” Gwen said. “You don’t typically think about it, though. The physical toil of sitting there with a chisel, scraping off tiny chunks of marble until you have the outline of a sculpture. The image of someone doing that in America, in industrial America, is more jarring, somehow.”

“That’s probably part of the reason I like it,” Dania said. “I mean, not that I thought about it like that, but that it’s a weird kind of sculpture that way. You don’t expect to see a gear built out of marble.

Gwen bent down to look at the gear in question, leaning against the pillar upon which the Apprentice rested his foot. The earlier point about marble made the intricacy of the carving all the more impressive – not only the even, mechanical cogs of the gear, but the sideswept, turbine motion of the five spokes in the center.

And yet, the marble seemed almost creamy at a distance. The rich, carved detailing of the pedestal stood out more against the wafting folds at the base of the Apprentice’s pant leg. Gwen silently wondered what material the pants of the model were made from.

“I like that shirt collar,” Dania said. She indicated the chest of the Machinist, just below his bearded chin, where a pair of mirrored lapels peeked out from underneath his apron. The neckline plunged just below the apron top – which was bent slightly forward, an indication of age and overuse that didn’t appear across the top of the Apprentice’s apron. 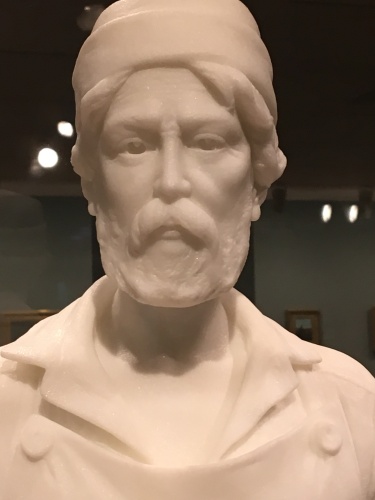 “Look at this eyes!” Eleanor said. Dania looked into them again, head on. The eyebrows, slightly furrowed, cast a shadow over the eyes, but she could just make out the pupils – two stalactites of marble left hanging from the rim of the eyelid.

“I love that style of sculpting,” Eleanor continued. “Where they carve out the white of the eye and leave the pupil. You can literally look into the eye. Plus, it distracts from his beard melting into his face.”

“I wonder if she meant for them to stand together like this,” Dania wondered aloud. “I mean, the old guy is sort of tilting a little to the right, like he can sense the other guy there, even if he’s not looking.”

“I’m sure the Art Institute was aware of it,” Gwen said. “This was a conscious decision to place them in the same case, rather than in adjacent ones, or on opposite sides of the room.”

“Ooh, what if they put them at the entry to the hallway?” Dania considered, excitedly. “Like gargoyles, guarding the other art?”

“More people would probably notice them, then,” Eleanor commented. She and Gwen had wandered around to the back of the statues, and could see Dania in the glass, framed between the reflections of the two figures.

Gwen had her face up close to the glass – observing the intricate swoops of cloth that formed the back of the Apprentice’s shirt – when Eleanor noticed her.

“Checkin’ out that rock-hard booty, Gwen?” she quipped. Her eyes, and Gwen’s, traveled down to the rounded marble just above the Apprentice’s raised leg.

“I’ll tell you who don’t got a booty,” she continued, shifting over to the Machinist’s flat behind. “Beardy over here.”

As Gwen continued around the apprentice, Eleanor took a renewed interest in the Machinist’s shirt. It had the same cloth waves, running down the back, but she now caught pocks of imperfection in the back – a small chunk missing just above the belt, and color imperfections down the pant leg.

“This one’s got a little damage,” Eleanor said. “Maybe she meant to do that, as some kind of ‘old and worn down’ metaphor.”

“The aprons are different,” Gwen agreed, comparing the smooth bottom of the Apprentice’s apron to that of his mentor. “I’m almost certain Stebbins was at least aware of the metaphorical comparison of the old and new ways here. Look at the precision of that pedestal with the rough edges of the slab that the anvil is sitting on.”

“Maybe that’s just to give them posture,” Dania said, as Eleanor knelt again at the Machinist’s heels. “You look at the other Greek statues, sometimes they have a tree trunk, or something, to lean on. Maybe they needed some support.”

“And the old one needs more support than the younger one,” Gwen added, stepping back to look at the pair in profile. “The young, nubile Apprentice, poised with thought, standing astride the lowly Grecian urn, master of his craft.”

Gwen slid around to the other side. “Compare the Machinist: dotted with errors, leaning on his work for support, his apron worn out and his eyes hollow.”

“Both their eyes are hollow,” Dania said. “And the Apprentice looks more frightened than the Machinist does.”

“What’s on his notepad?” Eleanor asked.

“Oh, not everything is a metaphor, Gwen,” Dania said.

“Everything is a metaphor in art!” Gwen returned, raising her curled fingers into the air.

“Hush,” Dania smirked. “I just like it, and I know what I like. They’re clean, simple, approachable – I don’t get the sense that either one is going to get attacked or kill someone, like the other marble statues.”

“Emma Stebbins got that ancient thousand-yard-stare of the marble statue down cold,” Eleanor commented. “Look at the plain arms, there’s no tension there.”

“Anyway,” Dania continued. “It’s a nice pair of statues in the middle of a very dense museum, and I like them a lot.”

“What would you name them?” Eleanor asked.

The three women stood before the men, attempting to pin a name onto the two of them.

“There’s a certain ambiguity to leaving them unnamed,” Gwen finally said. “They become universal, rather than a specific Machinist and Apprentice. Not to mention, we don’t even know if this is based on a real pair of people, or whether they were models in her studio ––”

“That one is Murray,” Eleanor interrupted, indicating the bearded Machinist. “And this guy is Ian.”

“Hmm, options,” Dania agreed. “I was thinking Beard-y and Gear-y.” 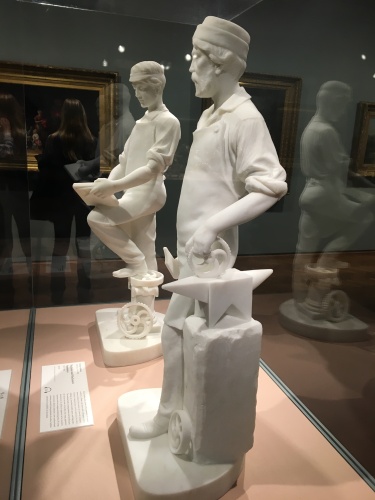 “Oh, you were going for that angle, I see.” Eleanor considered them again. “Beard-y and Gear-y…you could split the difference and go with Barry and Garry.”

“Ugh, then they sound like a folk duo,” Dania groaned.

They returned to the statues. After a moment, Eleanor spoke again.

“Graham…” She pointed to the Machinist.

“I liked Ian for the Apprentice,” Dania said.

Image Credits: Photos by author at the Art Institute of Chicago